The oil change is the most important maintenance needs for your Toyota here in Burleson, Texas. Oil helps the engine run optimally, cleanly, smoothly, and without overheating. At Family Toyota of Burleson, our recommendation is to change your engine oil and oil filter four times every year, or once per season. Here’s why.


Why is engine oil so important?

Engine oil has many roles. Its first function is to act as a lubricant, ensuring that the metal parts inside the engine do not grind directly against each other. Without oil, there would be too much friction in the engine, leading to excess wear-and-tear which causes heat.

Oil also helps cool the engine. While traveling, it picks up heat generated by the engine and diffuses it throughout. At the same time, it grabs tiny particles and impurities and drops them off at the oil filter, ensuring that contaminants do not get in the way of lubrication.

What happens if you don’t change engine oil?

Over time, the additives inside the oil break down and become harmful rather than beneficial. This is true even of the highest-quality engine oil. Additionally, the buildup of contaminants in the oil filter eventually limits proper oil flow. It doesn’t matter if you are driving a RAV4 SUV, Tacoma truck, or Corolla sedan — if you do not routinely change your Toyota’s engine oil, it will suffer from reduced performance and poor fuel economy, as well as risk overheating and total motor failure.

Why change oil once per season?

For Toyota models, it’s generally recommended by the automaker to change engine oil every 3,000-5,000 miles, which happens to be about what the average American drivers every four months. Getting an oil change at the turn of the season is a good way to ensure the engine is always performing at its best and ready for the weather changes to come. 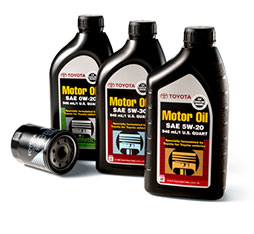 Not all engine oil is the same. There are several different types of engine oil that you should know about, as well as different levels of oil viscosity — all of which plays a role in how your Toyota performs and how often its oil needs to be changed.

The most common and affordable type of oil is conventional, petroleum-based oil. There’s not much to say about it other than that it is an ideal budget-friendly oil option that is safe and works with almost every vehicle, especially older models.

Full synthetic oil is a manmade compound designed to provide superior and longer-lasting lubrication for your engine. It is almost always better than conventional oil at maintaining engine performance and can 10,000-15,000 miles. However, it is also more expensive.

Older engines require special care to maintain longevity and performance. If your Toyota engine has more than 75,000 miles on the odometer, it may be time to consider high-mileage oil, which has unique additives designed to preserve seals, prevent wear-and-tear, and keep the engine running clean.

Viscosity is the measure of the engine oil’s resistance to flow. The lower it is, the thinner the oil and the faster it will flow inside the engine. The ideal viscosity for your car’s engine is determined by the engine itself, the time of year, and where you live.


The easiest way to deal with engine oil is to let the experts handle it. Schedule routine service appointments at Family Toyota of Burleson and we’ll take care of the rest, including reminding you when your next engine oil change is due.